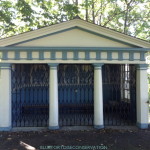 Going back to Blue with The Manor

Only yesterday I started reading The Manor. Three Centuries at a Slave Plantation on Long Island by Mac Griswold. The author is a garden historian and came across this house on Long Island about 30 years ago – and that event obviously made a serious impression. She started researching the house and its history which resulted in this biography, The Manor.

Although I have just read a few pages and the real history still has to begin for me, I was really struck by Mac Griswold’s description of the process of getting to know the house and the rooms and the gardens, after the initial discovery. As an architectural historian and historic paint conservator with many hours spent in derelict historic houses, I know how a house, a building, anything architectural can grab your attention after which will follow a long period of just asking questions, to understand the architecture and the house’s history. Answers may never come…

After a correspondence going back and forth, Griswold manages to get in touch with the then owner and arranges a visit. Her description of her discovering the house, the rooms, little details, is so vivid and compelling.

We are standing in the east parlor (…) a room of extraordinary beauty and strangeness. Beautiful because the proportions and fully paneled walls are exquisite, and all the more so for being so very early Georgian high style in this now remote corner of the world, once part of a thriving maritime economy. Strange, because there are only two coats of paint on these walls, through which the silvery old wood shows in patches. The bottom coat is that acid blue-green so fashionable in the mid-eighteenth century. The top coat is a modest biscuit color, emblematic of good taste, applied somewhere in the 1840s, just before wall colors turned dark and Victorian. How peculiar and lucky it is that no one put on a third coat, I think to myself.

As I was reading this, I could see that acidy blue-green in front of me.

Yes, very fashionable, and yes that color has been applied onto many panelings in many places during the second half of the eighteenth century. The most beautiful example I know of is in several paneled rooms, originally guest rooms, of American banker Henry Hope’s summer house Paviljoen Welgelegen, in Haarlem, just outside Amsterdam in The Netherlands.Such a brilliant colour, so eighteenth century, all due to the fact that finally, around 1720, a proper blue pigment entered the market: Prussian Blue. Blue pigments (and green, as a mixture) in art and architecture is a multi-volume history that I would love to produce, but can only touch upon now.

Sarah Lowengard did a study into Prussian Blue in The Materiality of Color. The Production, Circulation, and Application of Dyes and Pigments, 1400-1800.The test panels I produced to illustrate her research, as a way of experimental archaeology, rekindled my love and awe for Prussian Blue and how it can be manipulated to get a certain hue, texture or transparency. So incredibly interesting.

Of course we don’t know the pigment responsible for the colour in the east parlour of The Manor. Or not yet. But I just love how Mac Griswold intuitively asked the right questions after her observations and impressions during her first visit to the house. And I can’t wait to find out about its history, together with her.

Paviljoen Welgelegen is now in use as the seat of the Provincial Government of Noord-Holland, Haarlem, The Netherlands.